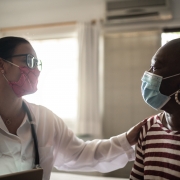 A Third Eye Health Care Coordination Manager, conducting the daily report, came across an encounter for a change in condition noting skin discoloration, signaling an end of life.  Eventually, the patient did pass away.  Upon further review, looking at past medical records for the patient, the Care Coordination Manager uncovered several concerns involving this case that, if reviewed by the Department of Health, could be seen as a deficient practice by the center.

Looking back at the deceased patient’s medical records, the Care Coordination Manager noticed that the patient had a central line.  Further analysis revealed that there were no orders for the care, treatment, or flushing of the central line, though.  Additionally, a redness, possibly indicating an early-stage infective process, had been noted but with no mention of a doctor being notified. Whether protocols were not in place or not being followed for patients with a central line, this is an issue that would raise red flags should the Department of Health review this particular case.

The Third Eye Health Care Coordination Manager presented the facts of the case to the center’s Director of Nursing and Regional Medical Director during a routine metric review.  Noting that it had the potential to be flagged by the Department of Health for several issues, this became a teaching moment for the center.  By catching the issues ahead of any audits from the state, they were able create and execute a plan of correction around central line protocols and several other issues identified by the Care Coordination Manager.

Taking the time to review a patient’s complete medical history, while ideal, is a rarity for a Director of Nursing with no shortage of tasks on their plate. Unfortunately, under most circumstances, it is the state that ends up finding these errors in care. By meticulously reviewing this patient’s record, the Third Eye Health Care Coordination Manager was able to bring forward several issues to the center’s clinical leadership, pinpointing areas that would cause alarm for any audits the state might conduct.  While the patient’s death itself was not unusual, by looking back through the complete medical record, areas where protocols were not in place or applied were now identified.  With this information, the center proactively expedited a plan of correction, training its nurses and setting processes in place to prevent future reoccurrences.  This will be especially beneficial should the Department of Health review this case, they will see that the building took the initiative to improve the quality of care they are providing.

By immediately creating this correction plan, showing that they have educated the nurses, and that the changes have been put to action ensuring such an event will never occur again, the center is now prepared when the Department of Health arrives.  Upon investigation of the deaths, the Director of Nursing will be fully equipped with a well-documented plan of correction, showing what measures have already been put in place to ensure quality improvements and prevention of reoccurrence. By showing diligence in recognizing the issue and already initiating a plan of correction and future prevention, the center may receive a tag for this case, but will be able to prevent an even more severe punishment such as being put in jeopardy by pausing new admissions, inflicting punitive financial damages, and declining CMS star ratings and reimbursements.